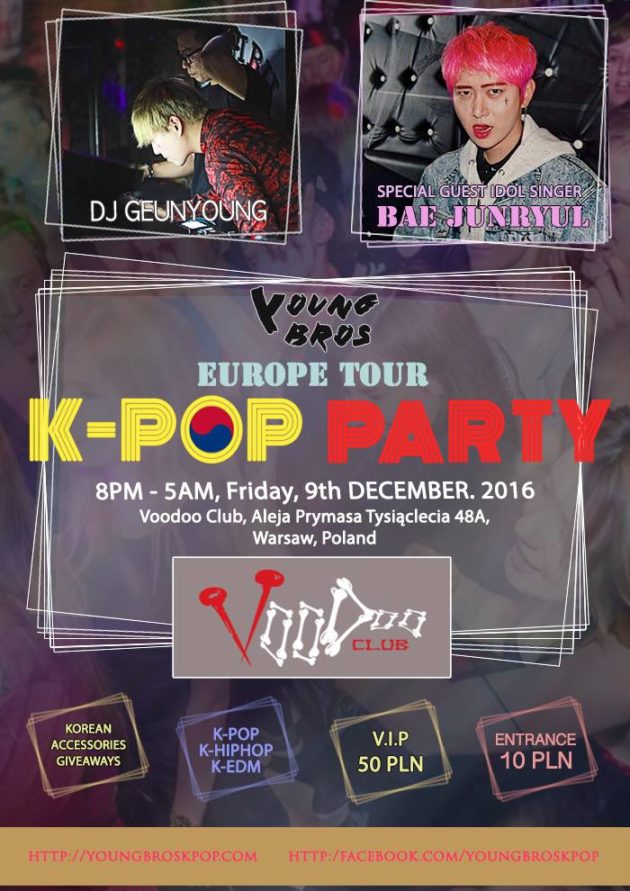 Young Bros is a party crew from South Korea. We are dedicated to throwing the most dynamic and classy K-POP party! The only genuine K-pop Party Brand’s first launching party in Warsaw!

We’d like to throw a magnificent party in Warsaw, gathering all the K-pop fans to party at the venue, Voodoo Club!

This will be the very first party that we are throwing in Warsaw and to make it extra special we are going to bring our special guest, Bae JunRyul! A Vocalist from the idol band, 'Monster’, Bae JunRyul will take the mic live on stage to perform his songs and K-pop cover songs!

We will make a super exciting party with all of you!

More surprising gifts are waiting for you at the party!

And a stylish korean photographer will capture the best moment of you during the party.

We are preparing a special giveaways.

We’ll be choosing the person with the best dresser outfit to win a surprise gift!

SO MARK THE DATE ON YOUR CALENDAR!

He was a trainee in SM ENTERTAINMENT for many years and prepared his debut as TVXQ,

Despite moving to a new company, he made his debut as a main volcalist in 'MONSTER’ and released 5 albums.

He’s coming to Europe throwing his showcase with Young Bros to start up his music life again.

Young Bros’ Stickers will be given at the entrance

Stylish Korean Photographer will capture the best moment of you in the party!

More informations will be updated on this event page

So don’t forget to follow Young Bros and join the event page to not miss any news!