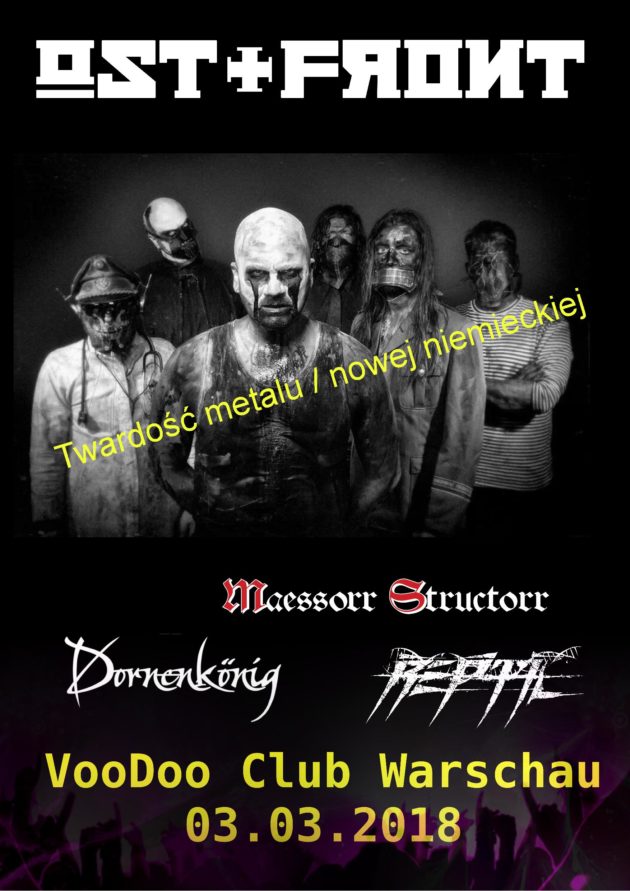 OST + Front are not afraid to offend, polarize and go exactly the step further, others fear. Provocation for provocation’s sake? Wrong! The six Berlin-men aren’t mincing their mouth and drill deeper where it really hurts. With a brutal mix of juicy metal riffs, massive electronics, a captivating voice with furious, German lyrics and an appearance between “Hellraiser” and “Mad Max”, this horde shatters the German music scene to its foundations. The debut album “Ave Maria” from 2012 entered the German Media Control album charts, tour dates in and around Germany followed to celebrate the band. An Ost+Front gig isn’t just a simple rock concert where a bunch of guys play their songs, but a truly spectacular hell of a ride between gore movies and apocalyptical circus! It didn’t last long until the release of the second album “Olympia” and the acid mixture of violent words, controversial lyrics and versatile instrumentation pushed the album to German charts spot #25. The two-year running “Olympia” tour was presented in the usual hard manner on various stages of Europe, like the Wave Gothic Festival 2014, Summer Breeze Festival 2015 or even in St. Petersburg and Moscow – Ost+Front got frenetic jubilations! Bigger, higher, further – “Ultra”: the motto and the title of the third album. Monumental film orchestration meets accurate electronics and hard guitar work; a musical epic about dread, horror and disgust as well as anger, sadness and pain in the world. 2016 marks the beginning of the “Ultra” tour, an event which no friend of hard German rock music should miss!
www.ostfront.de

Reptil
REPTIL consist of individuals who have conjoined to create a distincted impulse, in the process of breaking up their civic identity, to break out from the midst of our formatted society. Their metaphysical universe is their alternative plan, emancipation their vision, independence their strategy. Never in history have humans been more externally controlled and less free in their freedom as today’s ’Head Down Generation’. The abstract concept of freedom has turned into a prison of illusions. We are on the ropes and caught up in endless siren songs, a fatal spiral of death. It goes on and on, but ultimately leads nowhere. REPTIL liberates and returns each individuals’ autonomy. The work oscillates between explicit and expressive artistic performance, cinematic soundscapes, colossally brutal tunes, spiteful grooves and electronic extremes, edgy but sophisticated. The collaborators celebrate a game of hide-and-seek, brimming with deception, managing to create a jarring style by using a psychoacoustic mix of thundering drums, choppy electric guitars, manic sequences, angry bass lines, orchestration and dance. In the process, you will be moved, suffer, witness destruction and reconstruction with consistent intensity, unrelentingly impressive throughout all songs. With a dramatic effect and intensity REPTIL succeed in realize its goals in the best way possible with songs like the opener “Reptoil, Inc.” or the epic “Monolith” as well as the monumental song “Throne Of Collapse”.

Dornenkönig
German-language rock music, which goes under the skin. The powerful and grounded sounds, sometimes angry, sometimes emotional. Music, which from grief to euphoria serves the entire feeling palette. Their artistic recipe is so contemporary and burning-contemporary that the audience can easily be put into flames. The royal podium welcomes a new light design: curtain on for one of the most hopeful new German rock bands, curtain on for the Dornenkönig!
Around the Dornenkönig, four first-class musicians have gathered, with whom he competently struggles for every quintessential feintuning, without a raised index finger, or an old-wise pseudo-gaiety of a selfless fellow-man. He, who also addresses uncomfortable truths to a Messiah, always keeps track of reality and never switches to autopilots for his performance, keeps his present and future firmly in view. The Dornenkönig and his followers are a community deeply rooted in the deepest roots of the hair, with only one goal in mind: songs with suction and search, with strong melodies, catchy hooks, harsh riffs, dynamic grooves and hymn-applause.