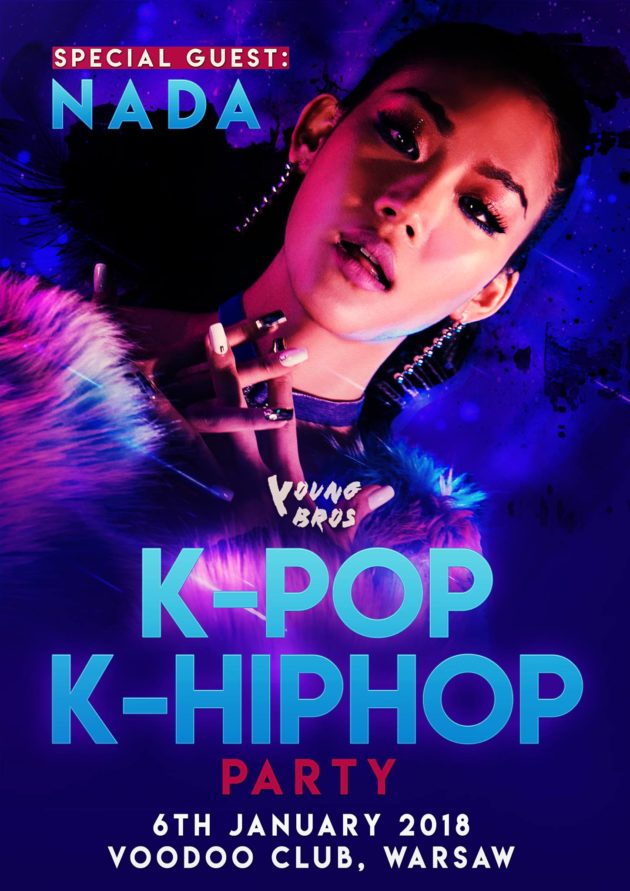 Young Bros is a party crew from South Korea. We are dedicated to throwing the most dynamic and classy K-POP Party!

We’d like to throw a K-pop & K-hiphop party in Warsaw, gathering all the fans to party at the venue, Voodoo Club!

We are really excited to announce our special guest „Nada”, She will have a live stage at our party! She was a main rapper for the girl group 'Wassup’ and was the runner-up in 'Unpretty Rapstar 3′.

It will be the coolest unforgettable party ever!!!!

SO MARK THE DATE ON YOUR CALENDAR!

SEXY. POWERFUL. REAL.
As a rapper, dancer, singer-songwriter, model and entrepreneur — NADA is a true multi-threat force to be reckoned with.

Trained as a singer and dancer, NADA’s career began in the immensely popular world of K-pop as a member and main rapper for the girl group 'Wassup’. Her rapping ability quickly garnered critical and editorial attention, leading to solo singles and features with other artists. In 2016, NADA was the runner-up in season three of the survival competition reality series „Unpretty Rapstar”. Highlighted by her song „Nothing” – an ode about personal pain and perseverance – NADA was able to come out of the manufactured shell of K-pop and emerge as a true hip hop artist. And just like her lyrical skills as a MC, NADA’s beauty is equally indisputable.

Fashion spreads with NADA have been published in various magazines including BNT International, W Magazine, In Style, and Marie Claire. She has also been in commercials for Reebok and Subway, and has graced the cover of Maxim Korea, twice. Currently, NADA is creating her own line of make-up with one of the largest cosmetics companies in Korea. Recently, NADA founded Ground Zero, her own independent record label and management company.

She released her most recent single last September – Trippin’ :https://youtu.be/E40qnzUiMj4

Ticket information will be updated soon!